Interest rates in the U.S. have been falling steadily since the 1980s, and real rates have been near zero during much of the expansion following the GFC.  Notably, interest rates peaked during the early 80s, when the Baby Boomers were entering the work force en masse, which at the time, provided a huge lift to both the labor supply and consumption.  Since then, population growth has steadily slowed (both in the U.S. and in most developed economies), causing economic growth to trend lower.  Over the past 9 years, economic growth has averaged just 2.2% per year despite incredibly accommodative monetary policy, and investor expectations for growth and inflation have fallen.  Bond yields followed. 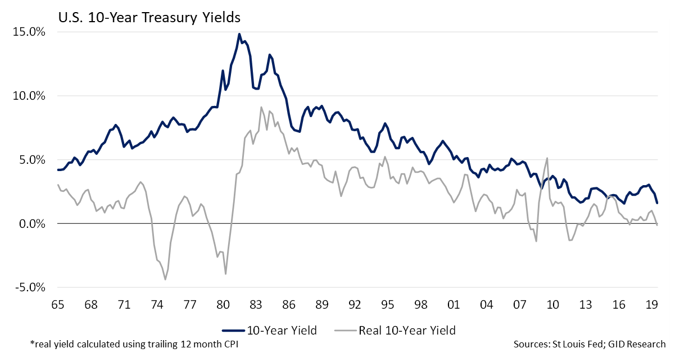 GID attributes the steady decline in bond rates over the past three decades to 1) lower expected economic growth given historically weak working-age population gains 2) lower expected inflation and 3) an increased supply of loanable funds (aka the “global savings glut”). GID believes these forces are structural in nature and will likely hold the 10-year treasury benchmark to near 2.0% for the foreseeable future.  This should continue to benefit real asset values, including commercial real estate.