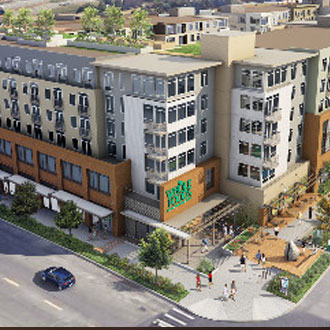 GID announced today the formation of a joint venture partnership with Lennar Multifamily Communities to develop The Whittaker, a luxury apartment community located in the West Seattle neighborhood of Seattle. Construction is set to begin in January 2015 with the first residences available September 2016. This joint venture is the first between GID and Lennar Multifamily Communities.

The mixed-use building will include 389 apartments and approximately 65,000 square feet of ground floor retail space where Whole Foods will be the anchor tenant. Common area amenities for the residential portion include a fitness center and yoga studio on the second floor and a large courtyard on the third floor. The property will also include a two-level rooftop deck on the north building and a second roof deck on the south building. Both decks will feature views of the Puget Sound and Downtown Seattle. Units will feature stainless steel appliances, quartz countertops and tile backsplashes in the kitchens with faux wood plank flooring through the living area.

The 2.5 acre development site is located on the corner of Fauntleroy Way SW and SW Alaska Street. The site is two blocks from the heart of West Seattle, known locally as “The Junction.” This central nucleus is where 275 businesses provide shopping, eateries, galleries and nightlife. West Seattle is known for its beaches and excellent views of Seattle to the east and the Olympic Mountain Range to the west. Residents of West Seattle can quickly commute into the Seattle CBD by bus or water taxi.

Matt Stuart, Vice President and Director of Western Region Acquisitions at GID commented, “The Whittaker will benefit from its highly visible location within a desirable, pedestrian friendly submarket in Seattle. GID is pleased to have formed its first partnership with Lennar Multifamily Communities and looks forward to potential future opportunities between the two firms.”